TraditionsDiscover the story behind the Wolverines nickname, winged helmets, the fight song and more!

The Big House rocks when Big Blue makes
their entrance into the stadium.

University of Michigan Nickname:  WolverinesIf  you’re ever watching the television program “Unsolved Mysteries,” don’t be surprised if the University of Michigan nickname isn’t examined.  Since the earliest memories of Michigan athletics, its teams have been known as the Wolverines.   However, there is no known reason why this animal was ever associated with the university.  There has never been a verified trapping of a wolverine inside the state, nor have there been any skeletal remains of a wolverine found that would suggest a history with the state. The nickname topic has been debated through the years.  Legendary Michigan football coach shared his theory when he wrote about the subject in the 1944 Michigan Quarterly Review.  Yost thought the nickname evolved from the trading of wolverine pelts at a Sault Ste. Marie trading station.  The fur traders may have referred to the Michigan trappers as “Michigan Wolverines.”  This fact would have led to the state nickname and eventually to the University. Albert H. Marckwardt described another theory eight years later in the 1952 Michigan Quarterly Review.  His thoughts focused on when the French first settled Michigan in the late 1700s.  Their appetites were so gluttonous or “wolverine- like” that the wolverine name was given to them. A border dispute between Michigan and Ohio in 1803 is the catalyst for the third nickname theory.  While the two sides fought over the proper establishment of the state line, the Michiganders were said to have called themselves wolverines for their fierce negotiating skills.  The Ohio version leaned more to the wolverine name being more associated with gluttonous “wolverine” habits of the Michigan natives.
Michigan Mascot: Wolverine National championships might be an annual event for the Michigan football team if they could match the relentless ferocity of the animal that they're named for. The wolverine is defined by Webster's Dictionary as "A dark shaggy-coated American flesh-eating mammal related to the sables and noted for its strength and cunning." In other words don't look for Disney to be featuring one anytime soon in animated glory. 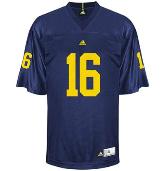 Felding Yost searched far and wide to bring a wolverine to Ann Arbor once he saw Wisconsin bring a live badger along with its football team in 1923. The former coach contacted 68 trappers, hoping that they could deliver a live wolverine. When they failed he expanded his search to include a dead or live version of the mascot. Yost finally made arrangements to pick up a mounted wolverine that eportedly owned by Michigan Senator, William Alden Smith. What he found instead was a howling disappointment, since the stuffed animal was actually a coyote. A mounted wolverine was finally found in 1924, but Yost continued his quest for a wolverine that could still inhale and exhale. The mission was completed in 1927 when 10 wolverines were shipped from Alaska to their new home at the Detroit Zoo. What would soon follow squarely fit the old saying, "getting more than you bargained for." On big game days, two of the wolverines were brought into Michigan Stadium and escorted around in cages. However, with each passing game the animals grew larger and more ferocious. A bewildered Yost stated, "It was obvious that the Michigan mascots had designs on the Michigan men touting them, and those designs were by no means friendly." Therefore, the idea of having wolverines at the stadium to inspire the football Wolverines came to a snarling halt with the end of the 1927 season. While nine of the animals would maintain a permanent residence at the Detroit Zoo, one of them would stay affiliated with the school. This wolverine was named "Biff" and he lived in a cage at the University's zoo so that students could visit him. 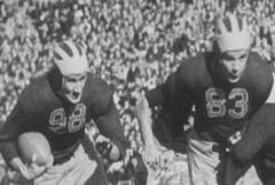 Michigan's Uniform Traditions: Winged Helmets When considering Division I-A football helmet designs you would be hard pressed to find one that has generated as much curiosity as Michigan's winged helmet. Many fans have certainly wondered j t what the helmet's design is supposed to symbolize. When Fritz Crisler arrived in Ann Arbor as the new head coach in 1938 he brought with him from Princeton ideas for ellhancing the helmet. He quickly transformed the black helmets into the winged style that is now the most continually used design in the Big 10.
Crisler not only made a fashion statement with the new headgear, but the change also helped to elevate the teams passing success. "There was a tendency to use different-colored helmets just for receivers in those days, he said. "I always thought that would be as helpful for the defense as for the offense," Crisler added. The thought proved to be no "passing fancy" as Michigan doubled it passing yardage while nearly cutting its interceptions in half that season.
Comments Off on University of Michigan