Known throughout college football circles as “The Game”, the Michigan vs Ohio State football rivalry first hit the field in 1897 and has been played annually since 1918.  Along with having a tremendous impact on the Big 10 Conference standings, the battle between these two foes has also had national championship implications numerous times.  The series was has also featured great rivalries from the participating head coaches.  The “Bo” vs. “Woody” era was long-standing and the completion between Michigan’s Jim Harbaugh and Ohio State’s Urban Myer took the series to additional intensity.  New Buckeyes Head Coach Ryan Day must now prove his mettle in “The Game!” 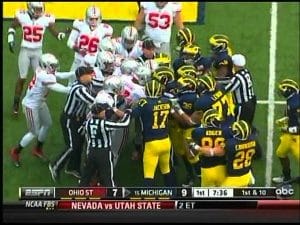 The Ohio State vs Michigan rivalry is regarded by many as college football’s top rivalry.

When talking about a heated rivalry such as the Ohio State vs Michigan series, fans often look for bragging rights that they can use in their discussions with fans from the opposing side.  With that in mind, we’ve analyzed the Wolverines vs. Buckeyes series in areas that extend far beyond wins and losses in the series.

They won the Game of the Century.  The No. 1 ranked Buckeyes defeated No. 2 Michigan by a 42-39 score on Nov. 18, 2016.  The game marked the first time that the teams faced off as the nation’s top ranked teams.  The victory pushed Ohio State to a slot in the BCS Championship game.

The complete domination of the series since 2000.  The Buckeyes have beat the Wolverines 16 times since the beginning of this century.

The University actually has a mascot!  Brutus Buckeye is one of the most popular collegiate mascots and is featured on national TV ads and beyond.  Michigan does not have a mascot.

Nobody dots the i like Ohio State!  The Ohio State University Marching Band is famous for dotting the i in Script Ohio.  It’s one of college football’s great traditions.

They have The Big House!  Michigan’s football stadium seats more than 107,000 fans and has a great nickname!

“The Victors”:  Michigan’s fight song is regarded as college football’s top fight song by many fans.  The song was penned following an 1898 victory over Chicago and has been firing up fans ever since.

Tom Terrific: Former Michigan quarterback Tom Brady is one of the greatest NFL quarterbacks of all time.

Find Tom Brady jerseys and Wolverines gear for Gameday and beyond

Click above for a great selection of Buckeyes Gear and Jerseys